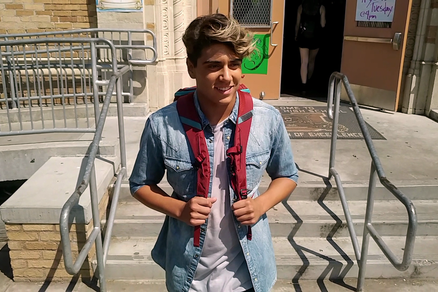 To promote their latest smart phone, and especially its video capabilities, LG Mobile have recreated a Twitter meme that spread worldwide.  As a result, they got 1.7 million views and 4,000 shares in 18 hours. What can we marketers learn from the success of LG’s video marketing, and how could they have done even better?

Back in February of 2016, high school kid Josh Holz videoed his friend Daniel Lara, commenting on his White Vans shoes and his general look with the phrase ‘Damn, Daniel’.  He uploaded a montage of these videos to Twitter. Within a week the video had been seen nearly 45 million times, brands such as Axe, Clorex and Denny’s were tweeting about it, and Lara and Holz appeared on Ellen.  Lesson 1: It’s not always obvious what’s going to hit big on the internet.

Why is this relevant to LG?

The concept behind the ad, which is apparently to be followed by two more recreations of ‘classic’ viral videos, is that with the new LG V20 phone and its 16 megapixel lens, your viral hits of the future will look so much better.  They’ve chosen a video which was filmed just for a bit of fun by a high school kid, with the phone held vertically, and made a version that looks and sounds great – and they made it using their new phone.  The message:  If you want to make great looking videos with your phone that might go viral, get a V20.

Ok, makes sense.  But what lessons can we, as marketers with much smaller budgets, take away from this campaign?

LG have found a way to tie the USP of their brand to a popular trend and show people how their lives (or at least their videos) would be improved with their product.  They also got the original creators to take part, which is why it piqued viewers’ interests.

You may think that either you wouldn’t be able to get any video creators to engage with your brand, or that if you did, nobody would care, but you could be wrong on both counts.  According to Google, YouTube creators are more influential for millennials than traditional celebrities.  And many popular YouTubers and creators on other networks are willing to use their influence on your behalf – and there are websites like Famebit, Octoly and others to help you connect with them.

If you’re going to jump on a bandwagon (and I’m definitely not saying you shouldn’t) you have to move fast.

We don’t yet know the remaining videos that LG will recreate, but they could hardly have picked a worse option to start with. The Damn Daniel meme, popular as it was, lasted all of about two weeks.  Here’s the graph showing search interest in the term from Google Trends:

Consequently,  the video has a very high proportion of dislikes on YouTube.  The majority of the comments on the YouTube watch page for the video are largely negative, focusing on how behind the times LG is and how dead the meme is.  Meanwhile, while the video has been posted to Reddit, it’s in the subreddit called ‘Fellow Kids’, which showcases ‘examples of advertisements and media that totally appeal to the radical youth of today’.

So, you should definitely look to popular trends when creating your marketing, but if you want to avoid ridicule, make sure they are current popular trends.